A few days in Hanoi is chaotic at best because there is so much that you can do. Aside from the Ho Chi Minh Mausoleum Complex, Hanoi is full of activities worth checking out. There’s a lot to cover so I’ll get right to it.

This is probably my favorite of the museums we visited purely because it was so visceral. Nicknamed the “Hanoi Hilton” by POWs during the Vietnam War, this prison held Vietnamese revolutionaries during their struggle for independence from the French as well as famous Americans, such as Senator John McCain. Much of the exhibit consists of prison garments worn by Americans and a lot of propaganda videos portraying the prisoners as being treated super well (which were very amusing). But all these displays were a stark contrast to the dungeon cells that they kept unruly prisoners shackled down in, the main room made to fit only 40 prisoners, but held 100 with only one barrel for a toilet, and the several methods of torture on display, along with the french guillotine used for executions.

The Vietnamese hold their historical women in high regard, and that is reflected in this museum. This, along with the Hỏa Lò Prison, I think are a better combination of museums that show the history of Vietnam than the actual National Museum of Vietnamese History (coming up). The exhibits in this museum highlight all aspects of what it means to be a woman in Vietnamese culture and shows profiles of numerous women of different historical backgrounds. Some standout parts for me were seeing the bamboo tubes used to keep umbilical cords until that child passes away, a bracelet given to a girl fighting the French with her name on it, so that if she died her father could ID her body, and the picture of a mother embracing her son who she thought was a traitor for years, but in actuality was a double agent.

There’s no way you won’t walk along this lake at some point if you’re staying in the Old Quarter. Whether during the day or night, this serene body of water offers a nice getaway from the crazy traffic and there’s a good chance you’ll see folks dancing or doing Tai Chi on the shores. Take a walk over the Huc Bridge and check out the Ngoc Son Temple (Open daily 7:30 a.m. — 5:30 p.m.; 20K VND) to learn more about the myth of the giant turtle who lives in the lake and protects the magical sword used to drive the Chinese out of Vietnam. 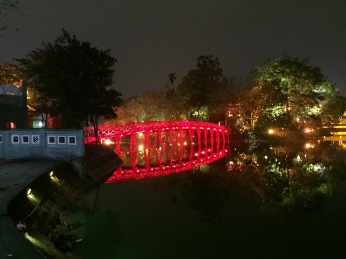 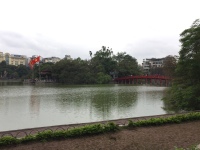 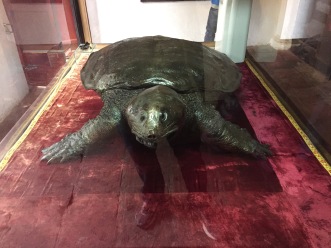 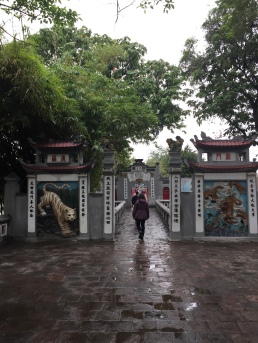 For an overview of the history of the area, this museum encapsulates all of Vietnam’s culture and heritage dating back to its prehistoric periods. While the Hỏa Lò Prison Museum and Women’s Museum were a bit more engaging to me than this one, if you’re into archaeology, this is the place for you. On top of the prehistoric fossils and relics, the museum features several of Ho Chi Minh’s manuscripts, anti-French revolutionary artifacts, and more Vietnam War stuff. They say no photos are allowed, but no one seemed to follow those rules, so snap away.

We stumbled upon this temple completely on accident, and were drawn in because they were having a concert that was open to the public. We discovered that it is supposedly the oldest temple in Hanoi. It had the most elaborate decorations of the temples we’d see in the city, and was so compact it kind of felt like going to your hoarder grandma’s house with all her trinkets and stuff everywhere (though this could be due to the fact that there was a concert going on).

This temple is dedicated to Confucius and is much larger than the Bach Ma Temple. It’s made up of multiple plazas and displays several dozen stone tortoises with doctors’ stelae (a stela is a tablet that acts as the story/diploma of the doctor). Multiple pagodas in the temple house shrines to kings and Confucius, and it’s easy to see how this quiet complex would be a nice place for studying. 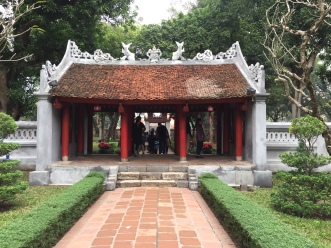 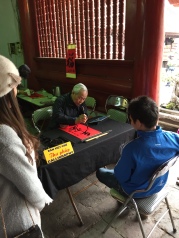 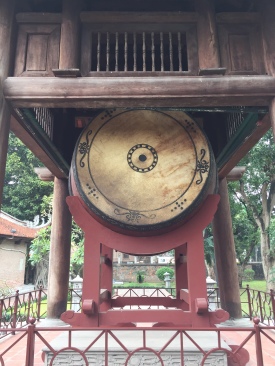 If you want to go for a bit of a hike, check out the Long Bien Bridge. A symbol of the Vietnam War, this bridge was bombed by the Americans numerous times, but was always repaired and to this day represents Hanoian resilience. We didn’t actually make it all the way across, but that shouldn’t stop you if you want to try.

Like the rest of Southeast Asia, there’s no shortage of places in Vietnam to get a massage. While I can’t speak to all of them in Hanoi, Mido Spa was quite nice. Being so affordable, I decided to try a hot stone massage for the first time and with that experience I’ve pretty much ruined all other massages for the rest of my life. The hot stones worked out the kinks better than any Swedish, Sports, Thai, or Deep Tissue massage I’ve done in the past. So with all the walking you’ll be doing, take a few hours off, and for about a quarter of the price you would pay in the U.S.– “Treat yo self!”  (There are no photos because that would just be weird.)

At night, Ta Hien and the surrounding area turns into a smaller version of Pub Alley in Siem Reap. Tons of people are out on streets enjoying beers and street food. If you want to go really cheap, look for Bia Hoi (25 cent beers) signs and have a seat. Bia Hoi generally isn’t offered at the normal bars; it’s just random people who make kegs of it and sell it out of their homes, but it’s an actually pretty okay pilsner and, in some cases, tastes better than the already cheap $1 corporate stuff like Bia Siagon or 333. It was at one Bia Hoi stand that we met a couple from Chicago who were wrapping up a four year Peace Corps stint. We drank multiple beers together for three to four hours and our tab ended up being about $10 total! It’s in this area you can also catch live music on the streets, see the amusing “Obama” Bar, or go into a club and inhale helium out of weird balloons that they sell (really, really popular with the locals and the most bizarre thing I’ve seen at a club). They’re pretty strict about their curfew in Vietnam, so don’t expect to go out partying super late.

Like many other markets around the world, Dong Xuan Market offers the usual food, clothes, electronics, gifts, etc. for locals and tourists. On the weekends in the Old Quarter, several blocks are closed to motor traffic in order to have a pedestrian only street market that starts at Dong Xuan and runs south to the Hoan Keim Lake.  It’s definitely worth taking a walk down to see, but for my money, I’d save the souvenir shopping for Hoi An (that post is upcoming). 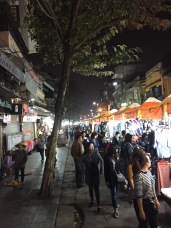 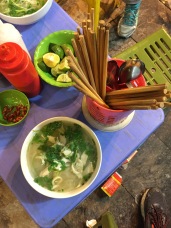 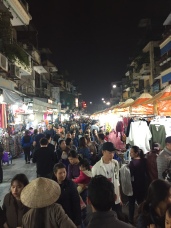 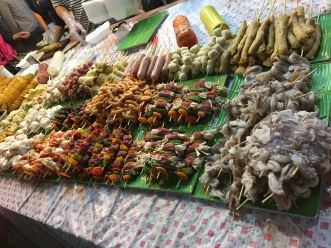