On a recent trip to Philadelphia the other weekend, a friend of mine and I decided to try our hand at two of the most famous cheesesteak shops in Philadelphia.  Pat’s King of Steaks and Geno’s Steaks are located literally across the street from one another at the intersection where 9th Street, Passyunk Street and Wharton Street meet.  On any given day at any given time that corner is overflowing with people stuffing their faces with bread and meat since both are open 24 hours (so you can get your heart attack in at any time).

Now admittedly, we heard from several locals that these two places are touristy and that some of the best places are actually out in the suburbs (Tony Luke’s for one was a place a local Philly girl swears by).  But since we only had a weekend, we had to see what the hype was about.

Here’s a rundown of how they compared:

Both had similarly long lines and both are Cash Only.  Geno’s by far has the more elaborate looking shop; it looks like something out of Las Vegas, wheras Pat’s has a more local, sandwich hut type feel.   Geno’s easily has the better eating setup: both have picnic tables (about 12 picnic tables or so each), but Geno’s is smart enough to set up standing bar style tables for people to eat along the side of the walls of the shop.   But while Geno’s may have the better seating, they get knocked down a notch because of something that made me feel a little uncomfortable.  When you’re at the casher, there are signs and pictures up of the owner with a “I want my country back” sign and “This is America, we only take orders in English” and shit like that.  Now, I’m not going to use this forum to get too much into it, but as an Asian-American I didn’t feel all that enamoured by that.

Onto the food.  When ordering, both places have the “instructions” on how to order your sandwich quickly.  Probably no one will do anything if you don’t order it like a local, but they may just get a little annoyed if there is a long wait.  You can compare it to putting ketchup on your hot dog in Chicago – they’ll just frown on the out-of-towner.  We ordered the same sandwich, “wiz wit”, at both places.  If you get the cheesesteaks “wiz wit”, which is the cheese whiz, it’s going to be very, very messy.   The steak at Geno’s is a bit more like steak-umm’s flat and solid strips.  The steak at Pat’s is more shredded and a little leaner.  The bread at Geno’s is more like a traditional sub roll like one you’d get from Jimmy Johns, whereas Pat’s break is a lot fluffier and spongier and more like a roll.

In the end the winner is: Pat’s King of Steaks.  You can’t really go wrong with either;  it really comes down to a matter of personal preference.

For good measure, we also tried one of Pat’s cheesesteaks with provolone cheese, peppers and mushrooms and that to me was actually the best out of all of them!  So if you’re up in Philly, enjoy! 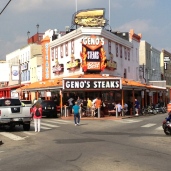 Most people have a list of things they want to do in life before they die.  Whether these things are big or small, everyone at some point has said “I gotta try that sometime”.   They even made a movie about this very idea recently called “The Bucket List“.   Now I’m not saying that I have a terminal illness, but one of the things I’ve always wanted to give a shot was skydiving.

People skydive for several different reasons.  Some jump for the adrenaline; some to try something that scares them.  Others jump to prove something to themselves, and I’m sure a few people are just plain crazy.  I think my reason for wanting to do it was a combination of all of those things.

Now as an idea, the desire to try jumping out of a plane is not very uncommon, however I would never had gone out of my way to find a place and make it happen on my own.  So when my buddy Vik calls me up and invites me to go with him and his friends, I “jump” at the opportunity (sorry, had to throw the pun in there).

One of Vik’s friends has experience with skydiving and took us to Chambersburg Skydiving Center, which is in southern PA, about 2 hours away from D.C.  Much like the website, the actual skydiving center isn’t much to look at.  The hangar and airfield are in the middle of farmland and the plane that takes the skydivers up is a simple 2 propeller Cessna.  Up until we arrived, I was surprisingly calm, telling myself that thousands of people from soldiers to civilians jump out of planes everyday.  But once you get there, pay (skydiving is not cheap by the way) and they sit you down to watch the instructional video and you start signing waivers saying “You could die doing this“, your heart starts to race.  You would be a total psycho if it didn’t (the instructor in the safety video even acknowledged the fact that it’s absolutely normal to be afraid).

After the video, the instructors take you outside to a mock airplane door for some rehearsal on what positions to assume, the procedures, and answer any questions you may have.  The type of jump that I was doing was a tandem jump, so I wouldn’t be doing as much of the work, but there were still several important points that my instructor, John, showed me about the skydive.  I’ll say that the confidence and thoroughness of all the seasoned jumpers put my mind immediately to ease.   They were the perfect combination of easy-going and competent.   And just knowing that they’ve all made hundreds of jumps helped calm us all down.

Also luckily for us, it was a beautiful November day.  Temperatures were in the mid-60s and there weren’t any clouds or wind to affect us.  Jumping out of a plane was enough of a heart-stopper, we didn’t need high winds and freezing temperatures on top of it.  After gearing up (and feeling like a total bad ass in the jump suit) we load up into the plane.  The cabin is small and cramped, holding about a dozen people sardine style.  As we climb in altitude, John starts to attach himself to my back and goes over again the procedure for when we get out of the plane.

At 14,000 feet, the door opens.  I pop my goggles on.  My heart is speeding up.  The wind is deafening and all I can hear is “Go, Go, Go” as the instructor orders each of the seasoned individual jumpers who rode up with us to jump.  Once those folks are out of the plane, my videographer (once I figure out how to convert a DVD, I’ll post the video) hangs right outside the door on the aircraft to film John and myself as we get to the door.

I slide up to the edge of the door and it finally hits me.  “Oh Shit” – literally.  And it wasn’t a reaction necessarily of fear, but more of a “I have no idea what’s going to happen next” feeling.  John thankfully doesn’t let me ponder this for long as I hear “ONE! TWO! ….”  I don’t think he even yelled “Three!” as he pushed the two of us out of the plane.  That first split second I’ll never forget.  It’s not the sensation of falling like on a roller-coaster because the plane is already going so fast.  It’s more of a feeling that your body has no idea what is going on.   The wind hits your face, and my eyes immediately begin to water.  After a second or two, I get my head together and remember to get into the skydiving position that we were instructed to get into.  From there, it’s literally flying.  There’s no other word to describe it.  I look up and I see the videographer right across from us.  Even as we’re free-falling I distinctly remember thinking to myself how cool the collected that dude must have to be.

I did my best to try and smile for the camera, but when the wind is going 120 mph into your mouth, it’s a challenge.  What’s amazing was how quickly you can fall from 14,000 feet to 6,000 feet.  It was probably at most 60 seconds.  Once our altimeters hit 6,000, John hit me on the head three times and yelled “Pull, Pull, Pull!”.  I reached down and yanked the cord to open the chute (John said afterward that I didn’t hear him the first time and was a second away from doing it himself).

When the chute opened, my body was thrown up and back.  Not only did my legs almost kick me in the face, my groin yanked upward and I thanked god that everything on me was “centered”.  The 5 minute glide down was so serene compared to the windy craziness of the previous minute.  John and I chatted and we made some acrobatic turns in the area, which gave me more of the roller coaster sensation that you don’t get in the initial jump.  I was amazed just at how free I felt.  Suspending in air like we were really gives you time (even as short as it was) to appreciate the view and too be honest, just being alive.

As we neared touchdown, John reminded me of the procedure (another nerve-racking moment because failure to follow his instructions would have lead to my legs being broken by the ground) and we slid into the landing zone like we were sliding into home plate.

Hitting the ground, with all my senses returned,I literally couldn’t stop laughing with glee.  We had all done something pretty amazing, something that most normal, sane people wouldn’t even think about trying.  But I’ll tell you this: the adrenaline rush is addictive.  The only thing we could think about was going up again and taking it to the next level.  I think when the opportunity arises, next time – I’ll be launching out of the plane on my own.