The complex is a massive memorial the holds the mausoleum itself, where you can view the body of Ho Chi Minh, along with other memorials, the Presidential Palace, the Ho Chi Minh Museum, and his Stilt House. It’s important to make sure that you make the mausoleum the first part of your trip to the complex (don’t confuse the museum with the mausoleum). It’s only open from 8 am–11 am on Tuesday, Wednesday, Thursday, Saturday and Sunday (last entry is at 10:15 am) and is closed from September 4th–November 4th when the body is sent to Russia for maintenance.

When we showed up to the complex at 8 am, it was absolute chaos. Hundreds, possibly even thousands of people were everywhere. Soldiers lined the streets, directing different groups to different areas. The main square was an intimidatingly open space with lots of granite and Vietnamese and Soviet flags piercing the cloudy sky. In the middle was the mausoleum in all of its glory, standing tall and ominously with giant a red HO CHI MINH branded on it. It has the looks of a communist Lincoln Memorial. Hundreds of schoolchildren, all with the same adorable uniforms, stood in random lines at different points in the square. They all (and literally ALL the children) would charmingly wave and shout “HELLO!” to any person who remotely looked like a tourist. It was a strange contrast to the intimidating scene of Ho Chi Minh’s final resting place. 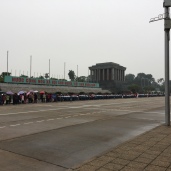 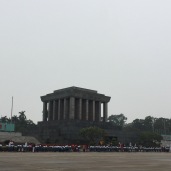 The square was so big that we had no idea where to go; there were lines everywhere. We first walked through a metal detector that we assumed lead to the right place, but each time we stepped in one direction, a soldier or guard would ferry us a different way. After thirty minutes of just walking with random groups around the mausoleum, we finally made it to what we thought was a ticket booth for the body viewing. We were wrong. It was a ticket booth for the museum complex. The person who worked in the booth spoke relatively good English and told us that it was free to view the body in the mausoleum, but we needed to get in line (obviously…).

So we walked back to where we started and just started to randomly ask every soldier if they could tell us where we needed to go. Finally, we found a sentry in a pearly white uniform who spoke English. He told us that we needed to walk down the street and find the end of a specific line, which he pointed us to. It was at this point that we picked up a lone Dutch backpacker who was also wandering around having the same issues as us. She had overheard our conversation with the English speaking soldier and that we actually made progress figuring out what the hell to do. So she tagged along with us as we walked, and walked, and walked until we found the end of the line. 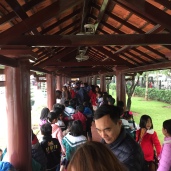 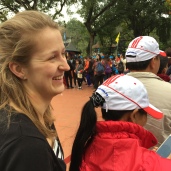 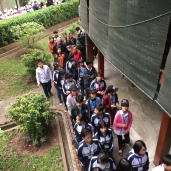 From there, the hour and a half wait began. But it was not without it’s entertaining parts. Much like lines at Disney World, the line to get into the mausoleum wrapped in and out of random courtyards and gardens. We spent the wait time getting to know our new Dutch friend. She told us she was doing a three month solo backpacking trip throughout Southeast Asia because she just graduated from law school (jealous much?). And because she was a tall, blond, European, who stuck out like a sore thumb in the mass of shorter Vietnamese schoolchildren, she couldn’t go a hundred feet without being stopped by a random kid and asked to take a selfie. I’m not exaggerating–dozens of girls would stop her, ask for her to pose with them, and then walk away before the day was done. It was one of the more amusing things I’ve ever seen in my travels. But that’s what makes traveling great: the people you meet. Our new friend would eventually end up spending the rest of the day and night with us. 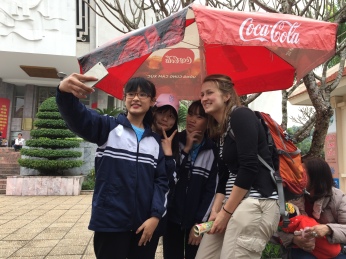 As you get closer to the entrance of the mausoleum to see Ho Chi Minh’s body, there are multiple signs with rules to follow. No pictures. No shorts. No bags. No chewing gum. No hands in pockets. No talking. On and on… You can tell that they take the body viewing extremely seriously, which is understandable considering that Ho Chi Minh is the biggest figure in Vietnamese history. As you walk up the stairs into the massive gray structure the decibel level of voices creepily gets lower and lower.

When you turn the corner to walk into the chamber, the lighting is a dark glowing red, and in the middle of the room, to my great shock, is the body Ho Chi Minh. It’s just there. Out in the open. I figured we’d see a coffin or sarcophagus, but no, he’s on fully display. Ho Chi Minh is dressed in a black robe with giant Vietnamese and Soviet flags hanging above and behind his body (think the Smithsonian Star-Spangled Banner sized flags). The body itself is in incredibly good condition, which makes sense considering that they send it to Russia every year for two months for ‘maintenance.’ It is an absolutely surreal, creepy scene.

As the soldiers move the visitors along, one of the most flabbergasting experiences I’ve ever had happened in my travels occurred. My buddy whom I frequently go on trips with is a great travel companion. I value his company whenever I’m off in some exotic land because he keeps his a good head on his shoulders and is always willing to experience new things. But there are times, such as this one, where I go…

So he’s in front of me in line, and we’re right at the spot where the body is directly facing us. He turns around, looks me in the eye, and laughingly asks “Dude, who is that?”

I see the Dutch backpacker and my sister, who are in front of him, turn their heads, completely dumbfounded. Under the watchful stare of the soldiers that fill the room, I tell my buddy (keeping my mouth shut to try and be subtle), “Duuuddddeeee, shut up and keep walking,” as I stare daggers at him.

When we leave the chamber (you only really stay in there for about thirty seconds), I ask him what the hell he was thinking and if he wanted us to get shot. I’m all for being a smart-ass and joking around every once in a while, but I could not believe he would make a joke right at that moment. However, what came out of his mouth next was even more bewildering.

So after taking a cab to the Ho Chi Minh Mausoleum Complex, looking for how to get in for thirty minutes, waiting in line for an hour and a half, walking into the massive Lincoln Memorial type building with the giant words HO CHI MINH written on it, to see, without question, the biggest historical figure in Vietnam’s history, my buddy still brain farted the shit out of the experience and wasn’t sure who we were looking at…

When all is said and done, we had a good laugh about it. I handed him my Lonely Planet with the history of Vietnam earmarked for him to read while the Dutch backpacker retrieved her bag. Believe me, it will be a story I will be telling at his wedding, funeral, and many other events for years to come.

After the mausoleum visit, the rest of the complex is relatively anti-climactic. I’d say you don’t necessarily need to do it, but if you have time, since you’re there, you may as well. For $1, you can see his Stilt House, the Presidential Palace, and the museum. We didn’t actually go into the museum because it’s closed for two hours at lunch, so I can’t really give you a review of that. But the viewing of Ho Chi Minh’s body in the mausoleum itself is definitely something worth waiting around for and experiencing.

Coming Up: The rest of What to Do in Hanoi.