As many of you are aware, the state of Colorado legalized the sale of cannabis in 2014.  Since then marijuana dispensaries have popped up all over Denver for both medicinal and recreational purposes.  I’m personally not a pot smoker, but seeing as I was in Colorado I was interested in seeing what the scene was all about.

From what I could tell, there are dispensaries scattered throughout the city and no matter where you are you’re probably within striking distance of one.  The one my friend and I popped into was called LivWell, which is well-known for their partnership with rapper Snoop Dogg.

I’m not sure why, but when I imagined going into a dispensary, I sort of pictured someone’s old living room with all the plants in their backyard.  My beliefs were quickly quashed the second we stepped inside.  LivWell was extremely clean and put together.  The moment you walk in, you get your I.D. checked by the front desk/security and they give you a number (it has a very DMV like feeling).  You wait in the Apple store looking waiting area until they call your number and take you in one of two storerooms.

The storerooms again are incredibly put together and look like something out of a store at the mall.  Because of their 3:1 customer to “budtender” policy, the storerooms aren’t too crowded.   Our budtender was extremely knowledgable — it felt like we were talking to a chemist more than a legal drug dealer as she educated us on all the science behind each item/bud.  She showed us all the offerings, which ranged from candies to drinks, brownies to patches.  And of course there were jars and jars of different marijuana strains.  Prices obviously vary depending on the product, but to give you an idea: a single cookie is $3, a three pack of mini-brownies is $12, patches that you place on your arm or ankle like nicotine patches are $10, and a bag of about ten sour patches gummies is $24.99 to name just a few of the prices.  Again, I never get high (Getting drunk? Well, that’s a different story), but I figured, “When in Rome…”, so I purchased a small edible for myself.

Pictures weren’t allowed, but I managed to sneak a few in. 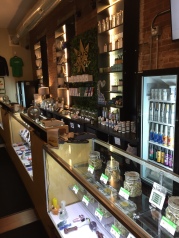 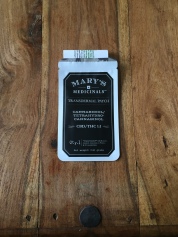