After our outing with the elephants, we made our way to what is on pretty much every Top 5 of Laos list — Kuang Si Falls.  Because we had already pre-arranged this at the hotel, our driver picked us up from the Elephant Village and drove us the 30-45 minutes to the falls.  If you take the excursion out there on your own, I would highly recommend getting a driver with an actual car as opposed to hiring a Tuk Tuk.  The road there is dusty, bumpy, and windy and would be very uncomfortable on the back of the rickshaw.

The entrance fee for the falls is 20K kip.  Be sure to bring a bathing suit and towel because even if you don’t think you’ll want to go in the water, you will once you see it.  The Kuang Si Falls are a beautiful emerald-jade color with hundreds of butterflies that flutter all around; it truly lives up to the hype.  The first watering hole you approach at the falls is by far the biggest and busiest.  Don’t make the mistake of thinking this is the only watering hole out of the excitement of seeing it first.  Keep walking up and you’ll see that there are about 7 or 8 watering holes and they get progressively less and less busy as you keeping walking up the hill (that being said, the first watering hole does have a tree that you can jump off of into the water). 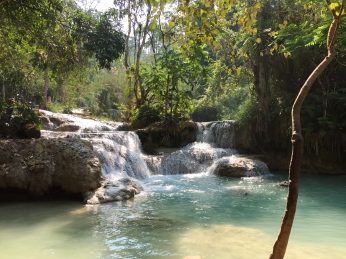 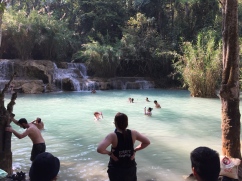 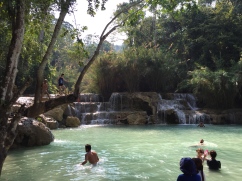 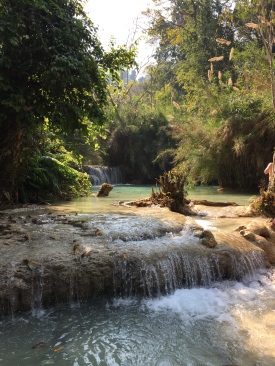 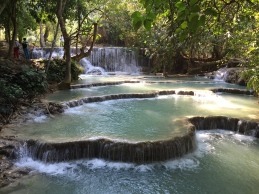 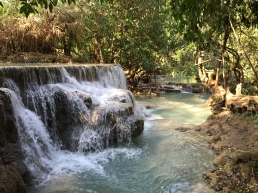 As you make it up the hill, you’ll eventually reach the apex of the falls which is a giant 200 ft. waterfall.  At the bottom, you can take some great pictures and there is a trail that will take you to the top.  Now when we tried to hike up this, we were both wearing flip flops, making it nearly impossible.  So if you want to hike up to the top, be sure to wear shoes.  Also, the climb is incredibly steep, like on your hands and knees steep.  It is not for anyone who isn’t in peak physical shape.  As we were struggling to get to the top, we asked the folks coming down if it was worth the effort.  Most, if not all, said “No”.  The general consensus was that the view wasn’t really that good at the top and you may as well just take more pictures from the bottom.  So it’s up to you whether you think the climb is worth it.

We eventually settled on a water hole 2/3 of the way up from the bottom of the trail and hung out there for a good couple of hours.  The water is a little chilly, but you do get used to it after a while and the refreshing coolness and cleanness of the water is a welcome escape from the hot mugginess of Southeast Asia. 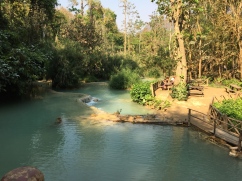 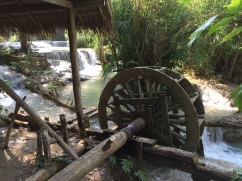 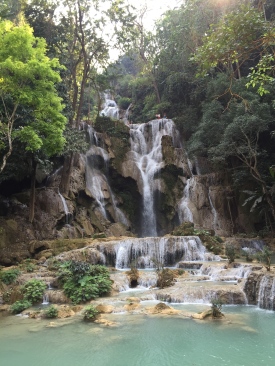 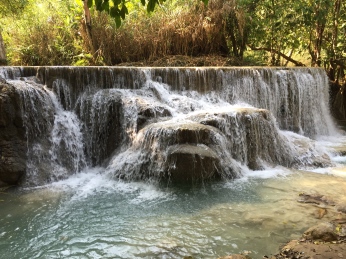 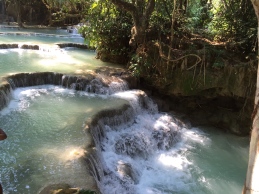 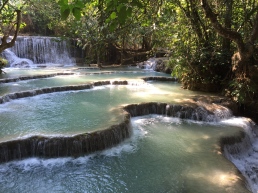