Back in 2010 South Africa hosted the World Cup and several of my friends went down there on a trip I unfortunately was unable to attend.  They came back and raved about the country and everything it had to offer.  Luckily my chance to visit South Africa happened with a family holiday trip.

Our journey started in Cape Town, a beautiful European, non-smoking, English speaking (1 of 11 national languages) city with Southern California weather; it reminded me very much of Sydney.  It didn’t feel like Africa, which wasn’t necessarily a bad thing after a 14-hour flight, and quite honestly, as I discovered throughout the trip, South Africa is a really easy country to negotiate for foreigners (just watch out cause they do drive on the left there).

One major thing to note is this:  The tap water in Cape Town is fine.  Our tour guide, Warren, insisted that we ignore what the guidebooks said, so we took the chance and didn’t have any problems.  I wouldn’t go drinking it in large amounts, but for brushing teeth and eating vegetables it’s perfectly fine.  (Warren was a great tour guide, I’d highly recommend reaching out to him if you ever visit: warrenmorris34@gmail.com) We also discovered that South Africa is also pretty progressive, as it’s the first country in Africa to legalize abortion and gay marriage; just a small step towards making up for the years of racism, which I’ll touch upon in depth later.

We stayed around the Victoria Wharf waterfront, which is super touristy, but very comfortable.  The waterfront, with live calypso bands playing constantly, is the center where most of the activities, food, the aquarium, and shopping can be found.  And there is plenty of shopping and eating to be had.  The exchange rate when we were there was a generous $1 to 13 South African Rand (R), so let’s just say we indulged in some very nice meals for the price of a trip to Olive Garden. 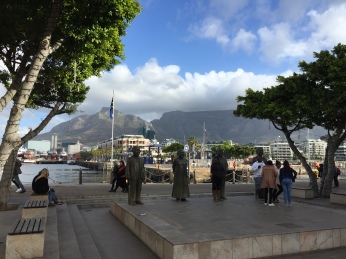 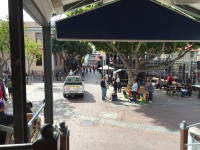 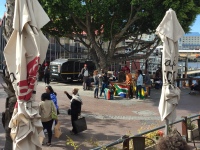 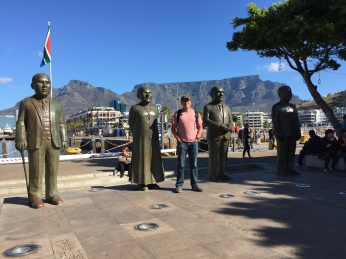 Here’s a rundown of a few things you can find at the Victoria Wharf waterfront.

I’m going to start my coverage of South Africa with this.  1) Buy tickets in advance for Robben Island.  They should be around $23.  2) Even then there’s no guarantee you’ll make it there.  We did NOT go to Robben Island.  Robben Island is like the Alcatraz of South Africa, the place where political prisoners were held, including the great Nelson Mandela who was imprisoned for 27 years.  And we didn’t make it there.  Why?  Who the hell knows.  The official excuse was that the ferry broke down.  The unofficial theory is that there was some form of corruption in play that apparently is not unusual that stopped the ferries.  Even though we got our money back, it was unfortunate and disappointing to say the least.  So if you’re planning a trip to Cape Town, yes you have to try and go to Robben Island because it’s like the Statue of Liberty of Cape Town.  But it’s annoying that you may travel all the way there and something might throw a wrench into that plan.

If you’re looking for a place to stay, Protea Hotels (the Protea is the national flower) are all around Cape Town, but the Breakwater Lodge is the location that’s closest to the waterfront; it’s about a 10-minute walk. The hotel is super clean, very modern, and has a fantastic breakfast buffet.  The hotel is located on Cape Town’s Graduate School of Business, which also happens to be a former women’s prison, so it’s unique to say the least.  But it’s the proximity to the waterfront that is it’s biggest selling point.

Pronounced “Key Four” (dropping some knowledge on you there), this was our first meal in Cape Town and was quite honestly one of the best.  The restaurant is right on the water and is composed of two parts.  The downstairs is a bar and patio with cheaper fare, whereas the upstairs and upstairs porch is a bit more fine dining.  We grabbed food upstairs and I had my first taste of Kingklip, a regional fish popular in South Africa.  The fish was quite good, a lot meatier than I thought it would be, and it was served with potatoes and butter sauce.  I’d also recommend their calamari appetizer. 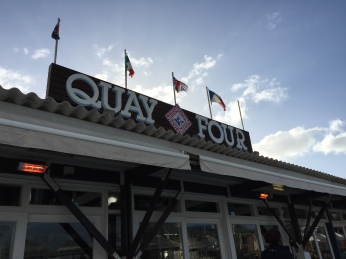 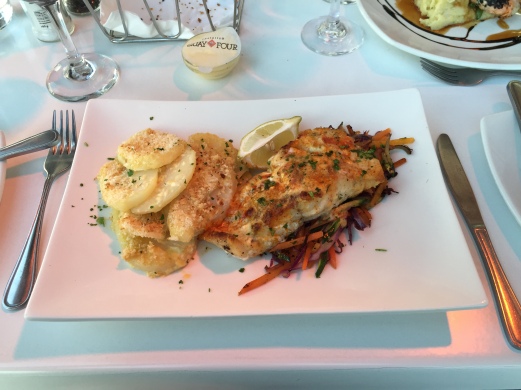 This seafood restaurant is actually located in the mall, and you can’t miss it because of the crowd of people sitting in the atrium tables they’ve set up and the line of hungry patrons trying to get in.  After we saw the line we figured it had to be good and worth trying.  While in line, they offer a wine tasting to ease the waiting period.  We were told the sushi was the most popular dish by our wine server, so that’s what we tried.  They have a “4 X 4” sushi platter which is a combo of their popular rainbow reloaded roll (tuna) and spicy creamy rock shrimp roll.  The food was great–the service, well…the waiter was pretty smarmy.  I couldn’t tell if it was him being just being a dick or if it was a South African attitude thing, but it rubbed some in our group the wrong way and it takes the restaurant down a peg. 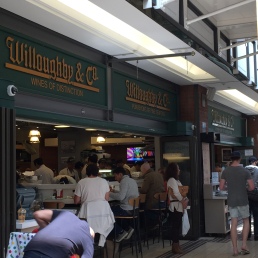 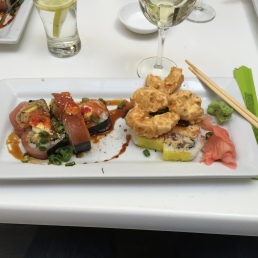 If for some reason you’re craving steak there’s a restaurant option in the mall called Belthazar that was actually pretty good.  They claim it’s rated the best steakhouse in Cape Town, which could easily be made up, but also could easily be true because I’m guessing there aren’t THAT many steakhouses in Cape Town to compete with. Regardless, the steak was damn good, and as I mentioned before, pretty reasonably priced, but again it’s only really worth going to if you’re craving steak.

Watershed and V&A Food Market at the Waterfront

These are just two of several places to go shopping on the waterfront aside from the traditional mall, which is like any other mall you’d find in the U.S.  The Watershed and V&A Food Market are quite charming and offer some non-chain products from locals.  In there you can find local artisan foods and goods, such as jewelry, nuts, fudge, teas, textiles, home goods, etc.  It’s worth a walk through if you’re looking for a souvenir. 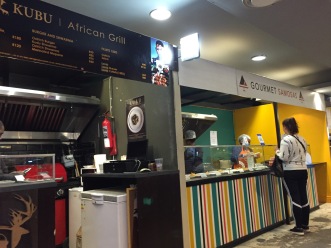 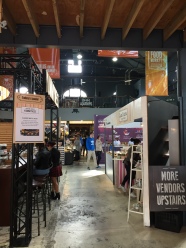 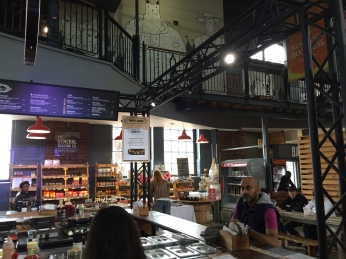 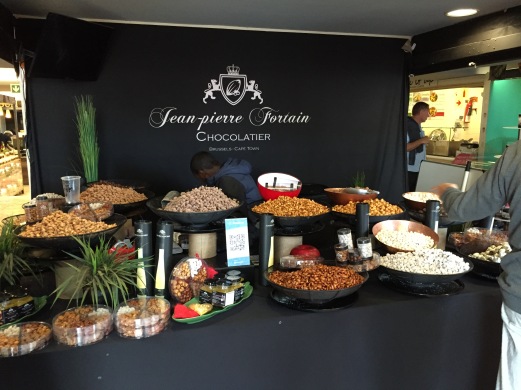