I’ve been to a lot of concerts in my time and I have to say that Red Rocks is arguably one of the best places to see a show.  Before going, I had heard from several people that it was an amazing place, so the hype level was already high going into it.

For those of you that don’t want to drive to get there, a $35 train that leaves from Union Station in downtown Denver is available.  When you arrive, the first thing you should be prepared for is a bit of a steep hike up to the amphitheatre.  Give yourself a little time to do that, especially if you decide to tailgate beforehand.  Since I still wasn’t fully acclimated to the thin air, by the time I made it to the top I was wheezing like an old man. 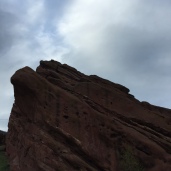 You’re allowed to bring in food, but no drinks (including water).  And obviously weed isn’t allowed, but I’m more than certain that most people brought that in.  One other tip: Make sure to pack in layers.  This actually applies to everywhere in the Denver area.  I haven’t been to a city where the temperature varies as much as it does from minute to minute as it does in Denver.  It could be 75 degrees and pleasant one minute and then a cloud covers the sun and it becomes bone chillingly cold the next. 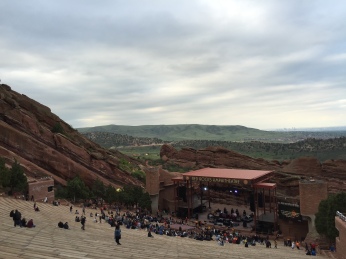 Most of the amphitheatre seating is general admission so if you really care about the band you’re seeing you should show up early.  That being said, there’s not really a bad seat in the house.  The incline of the seats is steep enough and there’s a ton of room between your feet and the seat in front of you.  You can easily stretch your legs forward and not even come close to hitting the head of the person in front of you.  This not only gives you an unobstructed view of the stage, but it also gives you a lot of room to dance and allows beer sellers easy access to get through (they serve beer pretty late into the night, 10:30 seemed like the cutoff time).

But the real star of the amphitheatre is the sound.  The sound goes right through you.  It’s incredible.  We went to see the Thievery Corporation and they were great to watch there.  Even if you’re not familiar with them, you probably know their song Lebanese Blonde from the Garden State soundtrack.  Because they have such an eclectic sound, it’s hard to describe how your body gets so enveloped in the music.  As the sun goes down and the stars come out, the rocks that make up the ampitheatre illuminate and it really feels like you’re in a time machine that’s stuck between today and the ancient Roman times.  If you’re in Denver and a fan of music, my recommendation is to try and plan a night out at Red Rocks regardless of who is playing.  The venue also shows movies and offers yoga as well, but getting there for music should be the top option. 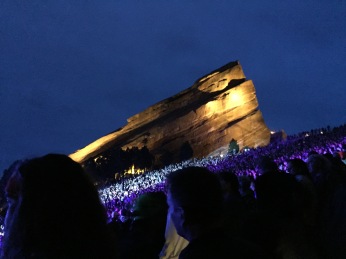 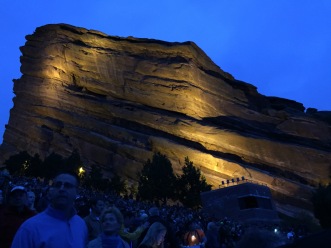 I’ve just recently returned from a work trip to New Orleans, LA and needless to say it was quite a week.  New Orleans is everything you’d expect from the Mardi Gras capital of the world.  With the open alcohol beverage laws in the city, New Orleans can easily cause a few rough mornings.  Bourbon Street in particular is as wild as its reputation and I’ll say this right off the bat: It’s not for everyone.  Bourbon Street on a weekend night is probably as filthy drunk of an area that I’ve ever seen – it’s neither a compliment nor an insult; it’s the truth.  Unless you’re in you’re early-twenties with a fondness for frozen drinks that are really sweet and loaded with the shittiest alcohol, I doubt that you’ll want to spend too much time there.  But I do recommend you walk down it at least once to experience the chaos (and the smell you’ll quickly want to forget).

Since this was a work trip, most everything was taken care of by the company, so I can’t give you too many specifics on pricing.  But I’ll give you my quick thoughts on a several restaurants and activities in the next few posts.  We’ll start with food in this post.

The signature cafe of New Orleans, this eatery is open 24 hours a day and tourists and locals flock there for their coffee and signature beignets.  For me personally, I think it’s “eh”.  You kind of HAVE to go there because it’s such a historical place.  But at the end of the day to me it was just a too doughy fried dough and coffee.  It’s not bad, it’s just not worth the hype.  It also doesnt’t help that it’s usually muggy and hot in New Orleans, which isn’t exactly the climate conducive to me wanting to eat a hot donut and coffee.

This is a weird review because we didn’t eat there.  Why didn’t we eat there?  Because it was closed when we arrived.  Why did we go when it was closed?  Oh, it’s because we had a confirmed reservation.  So yeah, we were a little shocked/pissed/amused/confused when we saw the place empty and a sign saying that it was closed on Mondays and Tuesdays.  A useful bit of knowledge that they probably could have told us when we made the reservation AND when we called again to confirm we were good to go.  The patio from outside the gates looked nice though.

Probably my favorite of all the places we ate, Three Muses is located on Frenchman Street just east of the French Quarter.  I would highly recommend going out there if you want to get away from the hustle and bustle of Bourbon Street.  Frenchman Street is still pretty crazy, but it’s a bit more of an older crowd (late-20s, early-30’s) with more venues that lean toward hipster with live jazz music than fratty dance party.  On a weekend night, it’s best to make a reservation at Three Muses (and at any Frenchman Street restaurant in fact) because the place is not very large.  Our group of 6 just happened to be lucky enough to show up when another party of 6 who had a reservation was late.  The hostess ended up seating us because the other group wasn’t on time (they’ll give you a 15-minute grace period).  When we were there, a female jazz singer and her trio of instrumentalists were performing music that sounded like it was out of the Roaring 20s; it was a fun, lively atmosphere.  The food comes in small sharing portions so it’s best to get a few.  My personal recommendations are the Mac and Cheese, Bulgogi, and Tempura Shrimp.  My co-worker also said the lamb sliders that I never got around to tasting were excellent.  As far as their cocktails, you should have a cool, refreshing “Earl Grey Gardens” with dinner and a “The Other Redhead” as an after-dinner libation. 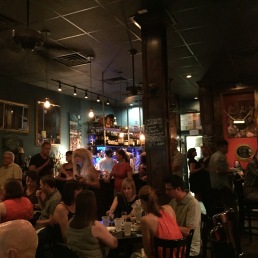 Works as a good lunch place on Bourbon Street to get a real good shrimp po’ boy or seafood dish.  It felt kind of like a chain, though it wasn’t, so don’t expect anything here to blow you away.  Keep it as a lunch option and not dinner because it’s solid, not spectacular.  The french fries there randomly were really good though.

Domenica was the restaurant our work group went to for our first dinner and I very much enjoyed it.   I wouldn’t say you should put this at the top of your least or even to make it a target to rush to, but if you do end up there I think you’ll enjoy it as well.  I had the Tagliatelle made up of slow cooked rabbit & porcini mushroom ragu (much to the chagrin of my co-worker who couldn’t stop picturing me eating a bunny) and it was delicious.  The Salumi & Formaggi platter they put together for us was spot on and I sampled the Red Snapper which was a popular choice amongst my co-workers.  The surprise favorite dish though was the Roasted Cauliflower w/ seas salt and whipped feta.  Definitely get that as an appetizer.

If you had asked me two years ago, I would have said Evangeline was a must-do.  But after going there this second time around, I would say not a must-do, but a recommend.  I want to say that the restaurant was having a bit of an off day, but that’s still not an excuse.  Anyone who ordered beer got beer that was pretty warm (not very welcome in the heat of summer), and our waitress while very nice, seemed a bit stoned.  At one point, my co-worker asked simply for yellow mustard and the waitress returned empty handed apologetically saying “We’ve run out”.   What restaurant runs out of yellow mustard??  The food was fine though, and the patio is really nice with the Christmas tree lights strung up.

We came here for brunch, and I’ll say off the bat that they did not leave a good first impression.  I was running late, so I didn’t see it, but apparently my friends who put our name down on the wait list were treated pretty rudely.  That being said, we still stayed and personally, I’m kinda glad we did despite the bitchiness people encountered.  I tried their Eggs Cochon, which is their signature dish, and it was awesome.  I’m not sure why I was skeptical of a dish that had pulled pork, poached eggs, and hollandaise and cheese over a buttermilk biscuit, but it was really good.