After a busy, busy day in Bangkok we headed out to see the nightlife by starting at a bar we found through Lonely Planet called WTF Bangkok.  WTF is located on Soi 51, down a relatively dead alleyway.  When you walk in, it’s your typical hipster dive bar with an art gallery on the second floor (which was unfortunately closed).   The mainly expat staff was friendly and our bartender Kris made us feel right at home recommending her favorite Thai beers and a great eggplant/eel sauce(?) dish (and I don’t even like eggplant) from the Japanese restaurant next door that caters to the WTF patrons.

As the night wore on, and the drinks kept flowing, we began to get really friendly with all the staff working that night, including the friends of the staff who were at the bar, and the chefs from across the street who were regular customers as well.  Thus began our one night in Bangkok (cue the Murray Head).

Needless to say, a massive amount of libations were consumed, so the memory on this one is spotty at best.  As WTF was coming to a close, one of the chef’s, Sam, made the suggestion to all go to a lady-boy bar.  This wouldn’t typically be the destination of choice for myself in any normal situation.  But this wasn’t a normal situation.  This was Bangkok.  So hell yes we were gonna go along to a lady-boy bar with the locals.

Before you get any thoughts in your head, I’m putting this out there: nothing happened with any lady-boys to me or anyone in the group.  Needless to say, the lady-boy bar was very bizarre.  The actual place wasn’t anything special; you could swap out the people in any dive bar with a pool table with lady-boys and that would be the scene.  And to be honest, the lady-boys who ended up hanging out with us were actually pretty friendly.  Even though they were likely soliciting for sex, which we weren’t going to give them, they were still fun to be around.  One of the girls in our group told us that the proper etiquette is to at the very least buy one of the lady-boys a beer, which is what each of us did.

Now I’m completely comfortable with that scene, but I would not have gone to a lady-boy bar had it not been with a group of locals.  I suspect that many of you reading will never end up there.  But I’m glad I did because Bangkok is a city where the societal lines of normality are placed differently than in other parts of the world and it’s something that was worth experiencing.

The lady-boy bar did not consist of the entire night.  We also went and got fried chicken/fried beef from bartender Brian’s favorite street cart, ended up at some random outdoor bar that literally consisted of a bar table and bar stools in a random dark alley, and went dancing again in some random night club down another random alley.  Yes, there was a lot of random in the night.  And because of that, the night ended at 6-6:30 AM.  Oh yeah, and I forgot to mention that we had to be up at 8 AM for the Bangkok Food Tour.  My review of that on the next post.

I’ve been pretty blessed so far to have started 2015 with trips to Australia (I’m still working on those Great Barrier Reef pics, more to come on that) and now — Southeast Asia.  The 12-day trip of the region consisted of Thailand, Laos, and Cambodia.  Starting off in Bangkok, which is essentially the international hub of SE Asia, was the natural choice for the first part of our trek.

The flight over is long and arduous, so if you can afford it, I would highly recommend choosing an airline carrier that is on the higher end.  We flew over, with a stop in Dubai, on Emirates Airlines.  Despite the long travel, that flight was easily the most comfortable flight I’ve ever been on.  I fully admit that it helped that I had an entire row to myself for the 14-hour leg, but on top of that the flight attendants treat you like you are in First Class, the TVs have every imaginable movie (I pretty much watched all the Oscar nominees) and outside the plane camera views. The more bizarre, yet cool part was when they dimmed down the light to let people sleep, the ceiling of the cabin illuminates like a starry night.

I do have one gripe that’s not on the airline. And it’s a tip to you all: Don’t push on the TV monitor buttons so hard.  It’s not your iPad, it’s the back of someone’s seat.

Now that that’s out of the way, we landed in Bangkok in the late afternoon and it was the typical chaos in the Bangkok airport.  Getting a cab was far less of a pain than we anticipated, as they have a cab stand with an organizer directing passengers into cabs.  The cabs should cost around 300-400 baht ($1 = 30 baht) for the 30-minute ride into the city, but our cab told us 500 baht flat rate.  At this point we were too tired to care about arguing and paid the extra $3.  This will be a trend throughout.  SE Asia is ridiculously inexpensive once you get there.  Food, taxis, bars, whatever — it’s all really cheap.

After an interesting cab ride where the driver told us about some good lady-boy bars, we arrived at our hotel, The Landmark Bangkok.  Though the Landmark isn’t anything special, a good solid western hotel (we will eventually stay at cheaper, more native lodging in Laos and Cambodia), what is an advantage of staying there is its close proximity to Soi 11, the popular going out street in Bangkok, and it’s a block away from the Nana train stop.

The trains in Bangkok, by the way, are really modern (just built in 2008), are cheap, and are super easy to use in Bangkok.  This is key because you’ll want to use the trains especially during rush hour.  Cabs at those times will be charging high flat rates because rush hour traffic is so bad that what typically would be a 15-minute drive could turn into an hour or two.  The train will be faster and cheaper.

After we checked in and cleaned up a bit, we went out to explore the area.  The streets are packed with vendors and the hustle and bustle that goes with that.  Right on the first night, I learned the #1 survival tip of Southeast Asia: Keep Your Elbows In!   At all times.  If you don’t, you’re likely to get the hit by a Tuk Tuk, or you might hit some person enjoying their street food on the sidewalk, or any number of things.  Keep them in.  I know doubt will be saying this again in the next few posts; it’s easily the mantra of the trip.

Walking around the streets of Bangkok, I immediately noticed something.  While the noise and energy of the streets was no different than the vibe in say for instance Cairo or Lima, there was an added element of dirtiness to Bangkok.  I don’t mean it physically had more trash.  I mean the sex industry is much more in your face than those other more conservative Third World cities.  There are a ton of “massage parlors” everywhere and lady-boys walking up and down the street.  The vendors on the sidewalk amusingly sell boxes of Viagra and Cialis next to the souvenir trinkets and t-shirts.  It’s a very unique experience walking around that for that for the first time.  But you do get used it.

Since we had no dinner plans, we did what the locals do and grabbed $1 soup noodles from a food cart on the street, which was delicious, and grabbed a 75 cent chicken skewer at a different cart.  We also grabbed a few beers at a dive bar on Soi 11 called The Alchemist (a good place to go if you want a chill vibe and some live music). 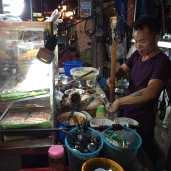 The night didn’t last long.  Jet-lag won and we passed out.  More to come on the sights and sounds of Bangkok.