After ripping over the surface of Langjökull with our snowmobiles, we slowed it way down for our ice cave hiking tour on Vatnajökull Glacier.

Our tour (again affiliated with Guide to Iceland for $200) began in the city of Vik, a small town located about 2-3 hours east of Reykjavik, where another over-sized Land Rover collected us. Much like the snowmobiling tour, it takes a good hour of seriously bumpy, off-roading to get to the starting point where we can start hiking to the caves. And again, like the snowmobiling tour, pee before you go. Keep in mind that this tour is only available November-March otherwise be prepared to be on a waterfall tour.

The winds on the way to the ice caves were the strongest we battled all trip (in fact we did this tour in lieu of a glacier hike option that was cancelled due to the dangerous wind speeds). Even if it’s not sunny out, I recommend bringing your sunglasses to cover your eyes from the blowing dust and ice. The tour company provides crampons and helmuts–both of which you are required to wear.

As we hiked our way towards the ice caves, which takes approximately 10 minutes, it’s an astonishing sight to see the black sand volcanic landscape all around. Our guide told us that they filmed parts of Interstellar there. Once you get to the ice caves, it’s not the immense caverns that will astonish you. It’s the fact that what you’re seeing isn’t stone–it’s incredibly polished ice. It was almost like we were inside a giant, textured glass vase.

After the ice cave tour, we grabbed lunch back in Vik at Suður-Vík. This cute little lodge had an excellent seafood soup and fried camembert.

But the real highlight (if you would consider this a highlight) was randomly seeing the Bachelor Arie and his new, second(?) fiancé Lauren. When they walked in, I at first thought I recognized them because they were on a previous tour with us or something like that. But when I leaned over to the only female in our group and asked, “Is that man the Bachelor?”, her eyes lit up, and she gave 100% confirmation that it was indeed the reality show stars. I’m not sure what was more bizarre–seeing the pair in Iceland, or recognizing them in the first place.

Happy as a clam with the seafood soup

The bachelor and his fiancé

Special thanks to Vikram for filming. The tour guides said specifically NOT to film because of the risk of losing your phone. But Vik doesn’t really ever follow the rules…

Spending time in Reykjavik is nice, but the really good stuff that Iceland offers is outside of the city. While there were many highlights of the trip, the most “exhilarating” of them had to be the snowmobile tour on top of Langjökull Glacier.

It’s not the cheapest activity ($300 with Guide to Iceland), but in this traveler’s opinion it’s money well spent for a unique and memorable experience. To get to the outpost, you ride what can only be described as a monster truck sized rover for an hour to the top of the glacier. Be sure to pee beforehand because the ride is slow, bumpy, and will make your bladder feel like it’s on a one-hour bull ride. 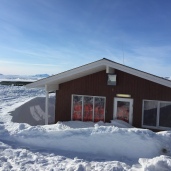 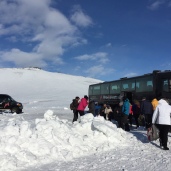 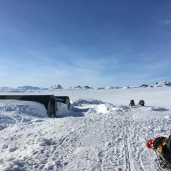 Once you get to the base, and I know it’s an overused cliché, it really does feel like you’re on Hoth or North of the Wall. To give you an idea of how cold it is up there, the boiling hot coffee (and I mean it was boiling hot) they offer is ice cold within two minutes–just from holding it outside. And again, be judicious with what photos you want to take. Your camera will shutdown because of the cold. Keep it close to your body when you’re not using it to keep it from freezing. 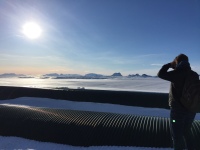 Don’t worry about needing a jumpsuit as they provide those along with helmets, gloves, and masks–you’ll feel like an astronaut. The snowmobiles carry two people, though if there’s an odd number there will be solo riders. The vehicles are simple to understand how to use, but much harder to operate in practice. 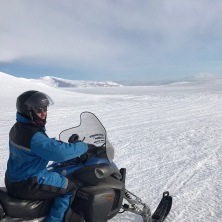 The snowmobiles top out at incredibly fast 80 mph; you will feel it in your arms if you’re the driver. Turning these things while on inclines and declines is a serious workout, and if you don’t lean your body with the correct form it is not hard to flip these things. It’s even more challenging if you’re on one by yourself as you don’t have the passenger helping you lean with the turns. Luckily, none of us flipped! (Though we came heart-stoppingly close a couple of times…) Your face will take a beating as well from the howling wind and snow.

The views are nothing short of spectacular. It’s just 360 degrees of beautiful white, glistening snow–a really surreal sight especially with the silence. We also got lucky that it was a perfectly sunny day; we were told that weather that great comes very rarely.

The snowmobiling is an activity very much worth doing, even with the price you have to pay.